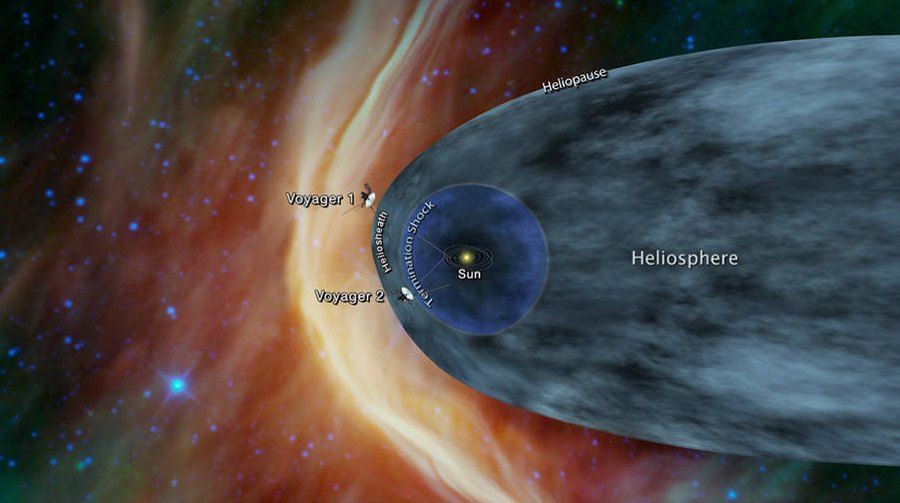 Launched into space in 1977, the Voyager 2 probe detected an increase in cosmic rays that came from outside our solar system. This means that the spacecraft is approaching the boundary of the heliosphere, beyond which is already interstellar space.

The NASA-owned machine is currently at about 17.7 billion kilometersów from Earth. That’s more than 118 more distances than the distance between Earth and the Sun. Since 2007, the probe has been traveling upóChews through the outermost layer of the heliosphere – a huge bubble of wokó³³ of the Sun, where solar wind pressure prevails over galactic winds.

Heliosphere is a kind of magnetic „bubble” produced by the Sun surrounding and protecting our solar system. This „bubble” matter constantly ejected by the Sun covers all the planets and most of the minor bodies in the Solar System and protects them from harmful cosmic radiation by blocking high-energy particles, które formed in interstellar space.

When Voyager 2 passes the heliosphere, it will become the second man-made object after the Voyager 1 probe, whichóry entered interstellar space.

Since the end of August, an instrument aboard a probe called the Cosmic Ray Subsystem has measured about a 5 percent increase in cosmic radiation hitting the spacecraft at cfównaniu in early August. Another of the instrumentsóin the Low-Energy Charged Particle installed on the Voyager II probe have detected a similar increase in high-energy cosmic rays.

NASA specialists expect Voyager 2 to measure the increase in cosmic ray frequencies as it approaches and crosses the boundary of the heliosphere.

In May 2012, the Voyager 1 probe recorded an increase in cosmic radiation similar to that of those whoóry is now detected by Voyager 2. This was about three months before Voyager 1 crossed the heliopause and entered interstellar space.

But, as members of the Voyager mission’s science team note, the increase in cosmic rays is not a definitive sign that the probe has put a wkrótce will cross the heliopause. Voyager 2 is located in a different part of the heliosphere than Voyager 1, and a possible róThe differences in these locations mean that Voyager 2 may have a different exit time than Voyager 1. To this it should be noted that the heliopause is not a fixed boundary and moves inward and outward with the 11-year cycle of solar activity.

– We are observing changes in the environment wokóThe Voyager 2 probe, there is no doubt about it – said Ed Stone of the Voyager mission project. – We will learn a lot in the coming months, but we still do not know when we will reach the heliopause. We’re not there yet – that’s one thing I can say with absolute certainty – added.

The farthest and fastest spacecraft is currently Voyager 1. It is the only man-made object thatóry are found in interstellar space. Currently there are about 140 astronomical units (Astronomical Unit, AU, one AU is the distance róon the distance of the Earth from the Sun – about 150 millionóin kilometeró(w) from our planet – that’s more than 20 billionókilometerów. Despite the distance, NASA engineers can still communicate with it.

The Voyager 1 probe was launched from Earth in early September 1977. Twin probe – Voyager 2 flew into space a dozen days earlier, but Voyager 1 overtook its twin and reached the edge of the solar system first.

Mission launched from Earth to study Jupiter and Saturn and their moonsów. After the task was completed, the mission objective was changed to study the areaóinto the heliosphere. Researchers predict that the probes will have enough energy to function and communicate with Earth until about 2025.