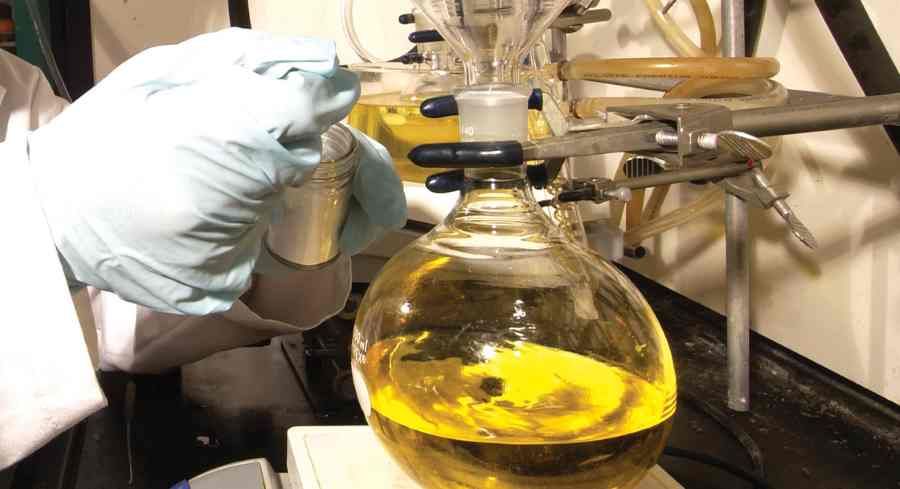 Control of chemistry with the help of light. New technique developed at IPC PAS

Researchers at the Institute of Physical Chemistry of the Polish Academy of Sciences have designed a molecular mechanism that, with the help of light, allows catalyst molecules to be effectively exposed or hidden. The solution offers new possibilities for controlling the course of chemical reactions.

The technique, developed at the Institute of Physical Chemistry of the Polish Academy of Sciences, whichóra was described in the prestigious chemical journal „ACS Catalysis”, carries a qualitative change in the conduct of industrial catalytic reactions and is an important step in the design of the systemóIn chemical mapping the most important features of an organismóin living.

Nanoparticles, któr surfaces change their appearance under the influence of light give the possibility of easy and precise control over the course of catalytic chemical reactions, róincluding multistage ones. The most important element of the demonstrated method is the mechanism of geometric masking of the centrów active catalystów on the surface of nanoparticles.

A catalyst is a substance that enables a reaction between specific chemical compounds, actively participates in it and to a large extent reconstitutes itself after its completion. WspóModern catalysts are designed on ogół in terms of optimizing catalyzed reactions and reducing catalyst consumption. This draws attention to the m.in. on its selectivity, i.e. its ability to accelerate a single, precisely selected reaction. However, there is little control over catalysts constructed in this way: once introduced into solution, they usually act immediately until the reaction stops.

But chemical compounds in solution can be influenced by light waves with energy tailored to the properties of a particular system. Light is one of the most convenient tools and can be easily introduced into the entire volume of a liquid, while at the ogół does not interfereóca it the course of the catalytic reactions themselves. The chemical system can be designed so that, depending on the light, it catalyzes (or does not) róthat different chemical reactions.

Scientists at the IPC PAS explain the whole concept using an analogy with sunflowers. These plants have thick, stiff stems ending in a seed basket. During the day, the headówka points toward the light, but the night does not curl up, as in the case of other flowersów. The stem bends at its base and the whole basket falls down.

„Our key complex of molecules behaves similarly to sunflowers, only that on a molecular scale. Earth, on whichórej our ‘sunflowers’ grow, is a gold nanoparticle, the stalk – A long molecule with the character of an organic ligand, its bendable fragment – A photocoupler that changes shape when exposed to light. The basket itself is the catalyst. The only róThe difference is that our ‘sunflowers’ are somewhat. shy: they bury their catalytic heads when wokół become bright, and they raise – when it is dark” – explains Dr. hab. Volodymyr Sashuk of the IPC PAS in a press release made available on the Institute’s website.

A novel concept for controlling catalysis developed by researchers at the IPC PAS has been tested in practice. The researchers made a chemical system using gold nanoparticles of three nanometer sizeów and one of the simplest catalystsów: an amino acid called proline. However, the method itself does not impose any specific limitations, so potentially any other catalyst can be used, functionally transforming it into a variety whoseówhose activity is controlled by light.

The new technique offers entirely new possibilities. Catalytic reactions have so far been carried out in a single solution, in which theórym there were the necessary substrates and a single catalyst. Now the same solutionór can contain substrates for multi-step catalytic reactions and a range of catalystsów, each activated by light at appropriate times. Several component reactions could run simultaneously in a single vessel, producing the chemical compounds needed for póThe later stages of the technological process, on which theóhe new reaction would be started after stopping the earlier reactions.

The solution developed at the IPC PAS has another advantage. "Until now, chemists, after completing a reaction, were left with a solution containing both the product and the catalyst" – móIChF PhD student Grzegorz Sobczak. "Removal of the latter not infrequently involved the development of additional stepsóin technological. In our method, the catalyst is deposited on nanoparticles. Potentially, these particles can be tailored to react with, for example. for magnetic fields. Once the reaction is complete, it would then be sufficient to attract the nanoparticles to spód dish, where they could be easily separated from the actual product" – notes.

The future of multi-step, precisely light-controlled catalysis promises to be interesting. The new generation of multicomponent mixtures could, for example, harden only at the user’s request, and could therefore be used to more accurately fill all kinds of molds, even those with very complex shapes. Convenient multi-component polymer adhesives, immediately supplied in a mixed, ready-to-spread form, are likely to become a popular solution. It is only someóre of the ideas already under consideration today. Scientists at the IPC PAS are still looking for an ideaóin how their concept could translate into specific applications.