Astronomers have explained the origin of Neptune’s smallest moon 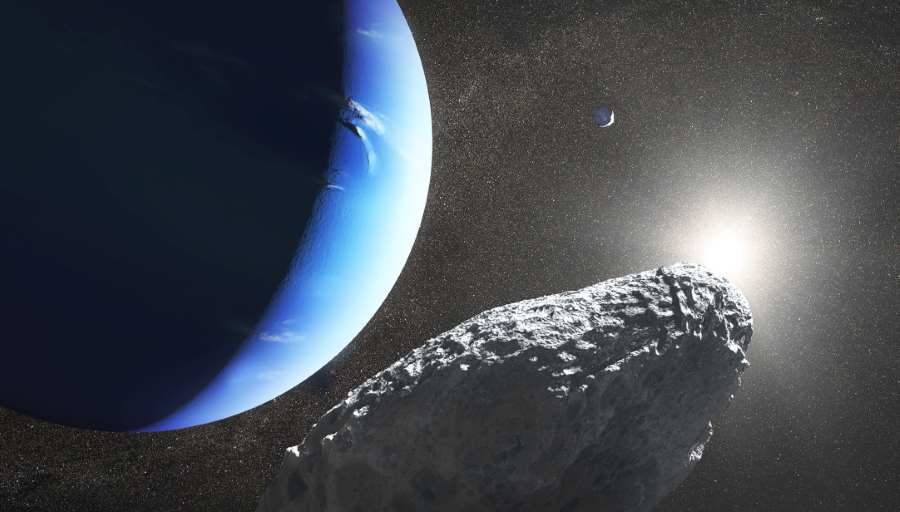 Astronomers have explained the origin of Neptune’s smallest moon

After several years of analysis, a team of scientists has explained the origin of the mysterious moon orbiting Neptune, which was discovered in 2013. Hippocampus, for this is the name of the gas giant’s smallest moon, is probably part of the larger moon Proteus.

The small moon named Hippocamp and its larger neighbor Proteus have extremely close orbits. The distance between the two is only 12,000. kilometerów. The gravity of the much larger Proteus should throw the smaller object out of orbit or lead to a collision between the two bodies.

So why does this tiny moon exist? Hippocampus is about 34 kilometersóin diameter and its mass is about 1,000 times smaller than its neighbor, Proteus, whichóry is about 418 kilometers longóin diameter. It owes its name to the hippocampi present in Greek and Roman mythology – pó³-horse and pół-fish, które pulling Neptune’s chariot. International Astronomical Union rules require Neptune’s moons to bear names taken from Greek and Roman underwater mythology.

– We didn’t expect to find such a small moon right next to Neptune’s largest inner moon, said Mark Showalter of the SETI Institute, who is leading the study.

Scientists first saw the moon in images from the Hubble Space Telescope'a in 2013, adding to the number of known satellitesóin Neptune to 14 (officially confirmed, as 14. Neptune’s moon in September 2018). It was spotted by Showalter in archived Hubble's images from 2004-2009. In a new study led by his teamó³ scientistów concluded that Hippocampus was once part of Proteus and was detached from it as a result of a collision with a comet or other object thatóra took place billions of years ago.

The findings were published in the journal „Nature”.

In 1989, the Voyager 2 probe flew past Neptune and photographed the six inner moonsóin orbiting around theół planets. Researchers believe they all formed at the same time as the planet itself. Seven other moonsów – external – were probably captured by Neptune’s gravity after it was already formed and are orbiting in further, more outward orbits.

Images from the Voyager 2 probe showed something else – a huge impact crater on Proteus. The structure is so large that a collision, in której formed, it could shatter the moon. – In 1989, it was thought that the crater, whichóry we saw in the photos is the end of the story. However, thanks to the Hubble'a telescope, we know that a small piece of Proteus remains and we see it today as the Hippocampus – admitted Showalter.

Neptune and its moons have had a rather violent history. Many billionów years ago the gas giant captured a large object from the Kuiper Belt – An extensive region of ice and rocky objectsóin, który extends beyond the orbit of Neptune. This object we know today as Triton – planet’s largest moon. The appearance of such a massive body led to the disruption of the existing external satellite systemóin Neptune and a series of collisions.

Over time, Triton has settled into a farther orbit, and debris from the shattered moons ofóin Neptune reassembled into a second generation of natural satellitesów. However, its proximity to the Kuiper Belt still resulted in frequent bombardment by comets and other objects. Scientists believe that it was one such event that led to the birth of Hippocampus, którego can be considered a third-generation satellite.

– Based on comet population estimates, we know that other moons in the outer Solar System róThey also collided with comets, disintegrated and formed anew. This has happened many times,” noted Jack Lissauer of NASA Ames Research Center, coópublication router. – This pair of satellitesów provides a dramatic illustration of the fact that moons are sometimes destroyed by comets – added.