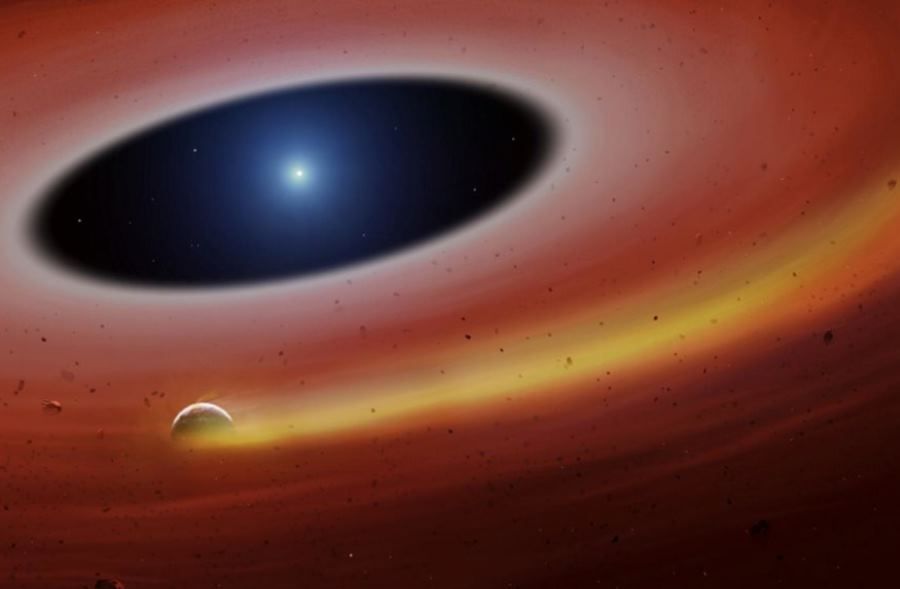 In a distant planetary system, astronomers have discovered the remains of a planet orbiting a dead star. The observations are giving scientists a glimpse of what our own solar system might look like after the Sun’s death.

Dr. Christopher Manser of the University of Warwick, the leadólead author of the study, observed a disk of matter surrounding a white dwarf with the designation SDSS J122859.93 + 104032.9 distant from us by about 410 light years. About a quarter of the white dwarfsów are surrounded by similar disks. Researchers believe they are the remnants of planets destroyed during the star’s death.

Using the Gran Telescopio Canarias in La Palma, a scientist discovered a ring of gas inside the disk, którego distribution suggests that it follows the object, like the tail of a comet. This gas can be produced by the object itself or by evaporating dust from collisions with small debris orbiting in the disk.

The object in question is a planetozymal rich in iron and nickel, whichóry likely once was part of a larger planet and whichóry survived the death of its parent star. Its survival is all the more astonishing because it orbits closer to the star than previously thought possible. It circles a white dwarf every two hours or so.

The discovery was published in the journal „Science”.

When stars about the size of our sun have used up all their fuel, then they die. They are shedding their outer layers and, as a result, the core alone remains, whichóre cools down over the years. In this wayób stars transform into white dwarfs.

The object found in the orbit of the observed white dwarf is the first to which theórgo detection used spectroscopy using subtle changes in emitted light to identify the extra gas emitted by the planetozymal. The debris disk itselfóin whichórym object is located, formed by the disruption of rocky bodies composed of such elementsów as iron, magnesium, silicon and oxygen – are the four key components of our Earth and most of the objectóin the rocky.

Astronomers estimate that the observed object must be at least a kilometer across, but could be as large as several hundred kilometers in diameterów, porócomparable to the largest asteroids known from our solar system. What’s more, this particular star has shrunk so much that the planetozymal’s current orbit is within the original radius of the original star. Evidence suggests the object was once part of a larger body in a much farther orbit.

– The star originally had about twoóch masses of our Sun, but now the white dwarf is only 70 percent of the. the mass of our sun. It is róalso very small – about the size of the Earth – and that makes it, a ogólnie all white dwarfs, extremely dense. The gravity of this white dwarf is so strong – about 100,000 times stronger than Earth’s gravity – that a typical asteroid would be torn apart by gravitational forces if it came too close to the– Manser said.

– We have discovered a planetozymal, whichóry is located deep in the white dwarf’s gravity well, much closer than we might expect to find anything. The object must be very dense, which is why we believe it consists mainly ofównie of iron and nickel. If it were pure iron, it could róalso survive in this location, in whichórym is located, but the równo well móhead could be an iron-rich body, but with an internal force holding it together, consistent with the idea that it is a planetozymal that is a massive fragment of a planet’s core. If true, the planet was at least hundreds of kilometers in diameterów – said Professor Boris Gaensicke, coóauthor of the publication.

The discovery offers an indicationówks on what planets might be in other planetary systems. It also hints at what awaits us in the distant future.

– As stars age, they become red giants, które „clean up” Most of the inner orbits of their planetary system. In our solar system, the Sun will expand to where theórym currently orbiting the Earth. It will be destroyed, as will Mercury and Venus. Mars and farther orbiting planets will survive and are likely to shift their orbits slightly further from the Sun – Manser said.

– In 5-6 billionóin years our solar system will have a white dwarf instead of the Sun, wokół którego will orbit Mars, Jupiter, Saturn, the outer planets and asteroids and comets. Gravitational interactions between the other planets will eject smaller objects into orbits where theórych they will approach the white dwarf, where they will be destroyed – added.